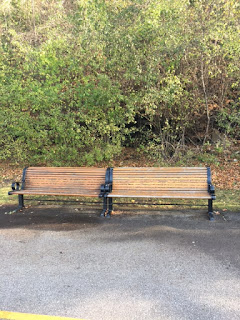 He appeared out of nowhere one day.  I had walked that path along the river on my lunch hour for years.  It had been my way of clearing my head of the constant trials and tribulations at the office.  Then one day out of the blue, there he was sitting on the bench serenely staring out at the river.  By his physical features I thought he was First Nations.  Perhaps, he was an elder of some tribe?  He certainly looked the part.  He had two long grey braids, turquoise jewellery and a chocolate brown cowboy hat.  His chiselled features could have given him a starring role in the movie, Dances with Wolves. I passed by him on the first day and smiled.  He smiled back and tipped his hat.  Did the same on the second day and by the third day my curiosity had gotten the better of me, and I found myself sitting down beside him on the bench.

He turned and mischievously grinned at me, “it’s about time you sat down.  I have been waiting for you.  Two days I had to wait.  I got a story for you.”

I was somewhat taken back by his response and thought, what have I gotten myself into?  Why did you let your curiosity get the better of you? You don’t have time to listen to some story by some little old man.

“But you do have the time,” he casually replied, “and I am not a little old man with an unimportant story.”

He broke in before I could start my sentence and shook his head, “the word sorry is so over-rated in your world.  It’s really a meaningless word.  You are only using the word because you think you have offended me or you are trying to be polite.  I am not offended by what you think.  Your thoughts about me and my story are irrelevant.  What you think of me is neither here nor there.  I have a story to tell and either you want to hear it or you don’t.”  He rolled his eyes and let out a heavy sigh, “I am sure there will be someone else that comes along the path that will be interested in hearing my story.  You are not the only person in this world.”

Guilt instantly filled my being and once again I thought about apologizing but caught myself before the words came out of my mouth.  Instead, I decided that since I sat on his bench, it would be in my interest to listen. “I would like to hear your story but I hope you understand I am on my lunch break and I really don’t have that much time.”

He gave me a wicked smile, “you operate on many presuppositions.  How do you know if my story is long?”

“I guess you are right.  I don’t know.  I was just assuming that with you being an elder that this story must be long.  Please, tell me your story.”

“That’s another useless assumption,” he said.  “You think that because I look like a First Nations, I must be a First Nations.  Maybe I am not.  Maybe I like dressing like this.  People and things are not always what they appear.  At your age, haven’t you learned that lesson?”

“Sorry but,” before I could stop words coming out of my mouth, he cut me off again.

“There it is again that famous word, sorry.  I bet you didn’t engage your brain before you used the phrase.  I am telling you quit using it.  It is meaningless.  Don’t you listen?”

“Well yeah but let’s face it the way you are dressed gives the impression that you are First Nations.”  I was beginning to get somewhat perturbed with him and myself for sitting down.  “So are you going to tell me your story?”

“Oh, so now you are wondering why in the world you sat down to talk to this little old man?  I wait two days and you want the story right now.”

“No, not at all.  I would never think that.”  I was beginning to believe that he could read my mind and I was starting to get quite annoyed with this little old man.  I had enough problems at work and didn’t need to lose the only tranquil hour in my day.

“Wow you get annoyed really easy,” he smirked as if to entice me anger.

Daggers of anger shot out my eyes at him.  “Are you psyche or something?  Are you just here to aggravate me?  Because you are doing a damn fine job.”

He grinned at me and shrugged his shoulders, “Thank you.  I always said if you are going to do a job, you do it right the first time.  Now back to you.  You are easy to read and very quick to anger.  That’s a real problem in your world.  Comes from living outside the moment.”

“I don’t know where you are from but my world is totally mixed up and yes I can be quick to anger.”  I casually glanced at my phone to check the time hoping he would just tell me the story or I could find an excuse to leave.  I really wasn’t looking for a counselling session.

“That’s because that’s all you think about.  You like being angry.  It gives you self-righteousness.   Yep, you like fuming thoughts swirling around in your head.”  To add emphasis to his words, he pointed to his head and furiously rotated his finger as he continued, “I bet if you ever had a happy thought you would squelch it.”  Casually chuckling, he slapped his hands together as if he was smashing happiness and then he roared in laughter.

I could feel the anger boiling in my blood.  He was really trying my patience and I was becoming furious with him.  “I wouldn’t be angry but you seem to be doing your best to push me in that direction.  You know what?   Thanks to you my tranquil afternoon walk has been ruined.  Now, I am upset and it is all your fault.”  I looked at him for an apologetic response.

He stared at me blankly for a couple of moments before cracking that offending smile.  “So, now I am to blame for your mood?   Isn’t that called the blame game?  You know, you are pointing one finger at me but there are three fingers that are pointing back at you.  You focus on the one finger so you don’t have to take responsibility for your role in life?”

I was immediately enraged.  This little old man was taking great liberty in identifying my faults. “What do you mean?  I am a responsible adult.  I have a job, a house, a car and I always pay my bills on time.  I take big responsibility for my role in my life?”  I shot back.  My breathing had sped up and I probably looked like some fire breathing dragon.

“Your list of items really doesn’t mean anything,” he casually replied.  “All just things, stuff.  I mean it is all nice stuff but that doesn’t mean you are responsible.”

I looked at him in disbelief.  “Perhaps where you came from these don’t show responsibility but, in my world, they all show I am a useful contributor to society.”

He let out a roar of exaggerated laughter, “Really?  What about responsibility for your mind and emotions?  You have passed me for two days and smiled but inside you were having arguments in your head.  As a matter of fact, your head looked like an old junkyard.  On the outside, you walked along smiling and friendly, inside you played out pretend battles.  You weren’t even cognizant of the beauty around you.  Instead you walked along the peaceful river fuming in anger.  Polluting the air around you with negative vibes.  You have to take responsibility for the thoughts you are thinking and the feelings you are feeling.  No one else is responsible for this.  No one should be doing your thinking and feeling.  I showed you what was inside you and it is up to you to make a conscious decision to take back your power.  The first step is shifting your thinking and feelings.  Simply move to good feeling loving thoughts.”

I couldn’t look at him as he spoke.  He words ripped through me.  He was right.  I wasn’t taking responsibility for my mind and emotions.  I was renting both of them out and blaming other people for how I felt.  I was living my life having imaginary battles with people in my head not only on this walk along the river, but in almost every moment of my day.  Encounters of make-believe where I play all the characters and write the script of what I would do or say.  All this anger was consuming my being and now, I was projecting it onto this little old man.  I was projecting it onto the world through my angry creations in my head.

I raised my head and turned to him to tell him he was right but he was gone.  It was like he vanished into thin air.   I sat there dumbfounded for what seemed like an eternity.  In this brief conversation, I had discovered the root of my misery.  It was not out there but it was in here.  At the moment of my comprehension, my cell phone pinged and a message from an unknown number appeared: “Cherish the moments.  Become responsible for your mind and emotions.  Don’t let them be easily confiscated.  Shift your thinking to what is going good in your life.  When you are angry you are not operating on the love frequency.”

Have a happy day.  Spread the Love.  Bev

Posted by beverly blanchard at 5:01 PM